The performance involves a dancer performing live, whose movements are tracked in real-time and used as the basis for an interactive, digitally animated environment that is projected around them: 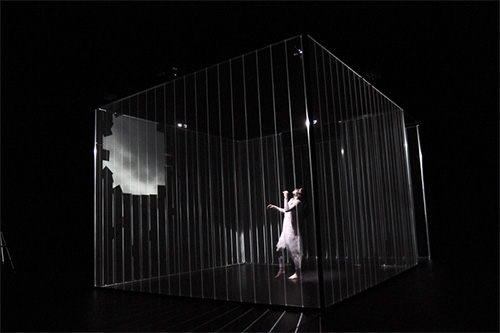 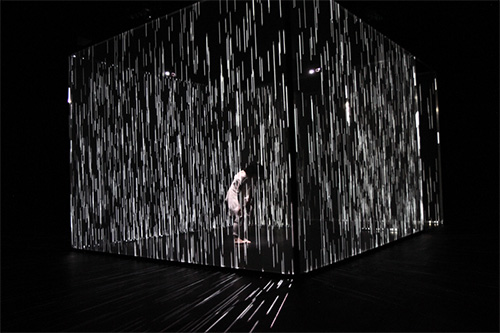 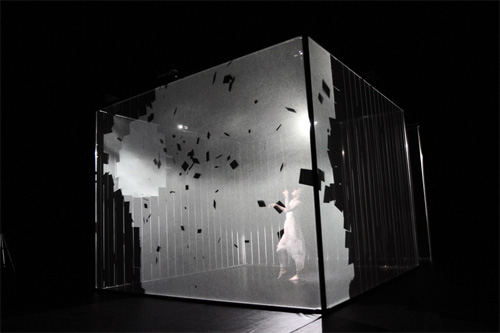 It was created by the French Company Adrien M / Claire B using their proprietary software eMotion. Here's more from their description of the project:


...Performed by an artist as a “digital score”, it is generated and interpreted live. The dancer’s body enters into a dialogue with the moving images in motion. These simple and abstract black and white shapes behave according to physical rules that the senses recognise and to mathematical models created from the observation of nature.

The audience experiences the performance in several stages. They first discover the exterior of the installation. As the dancer arrives, they gather around to watch the performance. When the choreography has ended, the audience can then take some time to wander amongst the moving images.

Through a minimalist transposition, this piece is based on images drawn from the imaginary realm of dreams, their structure and their substance. The box in turns represents: the bedroom where, once the barrier of sleep is passed, walls dissolve and a whole new inner space unfolds; the cage, of which one must relentlessly test the limits; the radical otherness, as a place of combat with an intangible enemy; the space where impossible has become possible, where all the physical points of reference and certitudes have been shaken.

Through the encounter of gesture and image, two worlds intertwine. The synchronicity between the real and the virtual dissolves and the boundary that was keeping them separate disappears, forming a unique space filled with a high oneiric charge.

Very cool, no? You can learn more from the video's description on Vimeo.
Posted by Andrew at 9:46 AM